Home How I got my Google ranking penalties removed (case study)

How I got my Google ranking penalties removed (case study)

Ranking well in Google isn't just about what you do right (like getting high quality links).

It's also very much about not doing things wrong.

As I covered last week, there are tons of things we can improve “on-page” to help get better rankings. They are more about simply following best practices and not making Google's job harder (e.g. site speed).

Thankfully (for AssociatePrograms.com) we've never gone down the road of article marketing, paid links, directory submissions or blog networks to try and improve our rankings. We're an old, established site that just doesn't need to do that stuff to rank well.

We have over 16 years of useful content that has attracted all the links we need. That's exactly what Google is looking for.

However, I've worked on plenty of sites in the past where we've strayed into greyhat SEO techniques that have ultimately caught up with us.

Most of the things we've done haven't been too edgy. We've only got one manual penalty, however, I'm sure we've had a lot of algorithmic updates (e.g. the Penguin update) that have, in effect, penalised us for either a poor quality link profile (Penquin) or a low quality site (Panda).

Side note: If you want to determine if a particular algo update has targeted your site, this is a cool tool that helps you overlay major updates at Google over your traffic data in Google Analytics. You can quickly identify to see if a particular update correlates with an algorithm change.

One site in particular was hit by these updates as well as a manual penalty. It was a site that was worth working on recovering, so I went through the process of trying to get the manual penalty removed as well as make the necessary changes to get traffic back.

So here is a case study on what I did and the results I achieved.

Dealing with the manual penalty

The first thing I did was to login to Google Webmaster Tools (GWT) and see what is going on.

Boom. There it is. A manual action.

In this particular case, it said that it had “detected a pattern of unnatural … links” and that they were “taking targeted action on the unnatural links instead of the site's ranking as a whole”.

So as you can see, this is a shot across the bow. It's saying that the site hasn't been penalized, but just the value of the links removed.

However, it's safe to assume that there was a big problem with the link profile of this site and we needed to fix it.

Getting busy fixing our link profile

We were confident that we had issues with our link profile (including a manual action) and we needed to take specific steps to fix it.

We attacked it in 3 steps:

It seems simple doesn't it.

However, when we got started we realised just how much work there was in both the researching and sorting of the good from bad links. Then undertaking the arduous task of trying to remove the crappy links.

I started the process by looking in Google Webmaster Tools at the incoming links to our site to see if there were any obvious ones that were heavily on Google's radar.

There were a few obvious ones that we could address fairly quickly.

As you can see, there were some article directories in there with a lot of links coming in. So we manually went through and removed those via the admin area. We spent about half a day removing the easy ones that had a login and allowed you to simply remove them from the index.

However, the next part was not so easy. We had over 20,000 links coming in from all over the place and it was becoming difficult to zero in on which ones might be problematic.

I figured there must be an easier way so I spent a few hours researching a service to help me.

I came across a service called LinkDelete that seemed to professionally handle both the backlink analysis and the removal.

After some cross referencing they seemed to check out with others so I engaged them further.

I'm a big advocate of protecting your brand, so I fired them a bunch of questions about how the process worked and asked them for some examples of the kind of reach out emails they send.

I've received a bunch of these emails for removing links from the AssociatePrograms forum and some of them are shocking. Almost threatening. I didn't want my brand, not matter how small to be associated with that.

The email response I got back was great and the examples were on the money. I also liked that they said that they are always testing for the best response rates.

So I signed up for their enterprise plan as it included a higher number of links, the fastest service and most importantly a disavow file to submit to Google.

Identifying and removing the bad links

Once signed up, they asked me for the URL for cleaning and they started the backlink audit.

They don't just use a couple of metrics to see whether a link is quality or not, but rather 25 points to ensure that they both identify as many links as possible, as well as ensure that they identify the good from the bad.

This was completed in a few days.

What was produced was a spreadsheet of all the URL's with a quality score beside them from best to worst.

Once I'd reviewed it, I simply deleted the ones I didn't want removed and submitted the others for removal.

The way that I managed my LinkDelete quota more efficiently was by identifying the ones where there is one domain, but lots of links.

I split these out separately and contacted the sites directly to get them removed on mass or else found the login for the article directory and deleted all the articles. This knocked out a huge amount of links and only left the more difficult ones for LinkDelete.

I then took those remaining links and submitted them via the LinkDelete admin area. 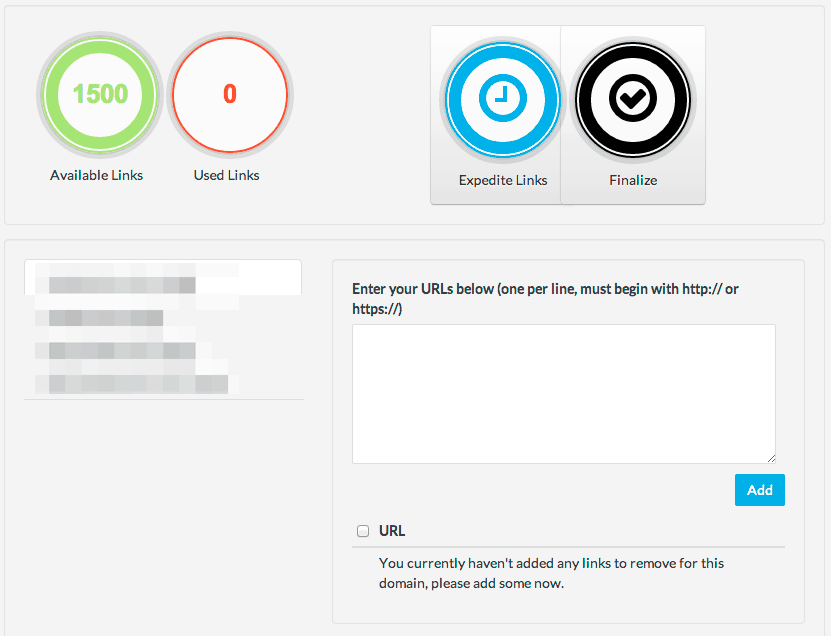 I had 2463 URL‘s left to remove, so upgraded my account to get enough quota for all the links.

They then went to work.

I was pretty interested in seeing the outcome of their work and was impressed with what they produced.

So I had to request that they try to remove 2463 links.

In the end they over delivered and attempted to remove 3745 links. They successfully removed 1540 links.

For the links that they couldn't remove, they generated a disavow file to submit to Google.

Once I had the final spreadsheet completed, it was time to submit a reconsideration request with Google for the manual action.

LinkDelete provided me with a nice guide on how to have the best chance of success when applying for a reconsideration.

One important thing they covered was the fact that Google like to feel like you've done a lot of work to clean up your act. So you need to both document the work you've done, as well as not let on that you've used a 3rd party service to help you with the process.

They want you to feel the pain, so make sure you make it seem like you've done the work yourself.

Keeping this in mind, I created a new Google doc and called it my “Link Removal Register” (readable if you have the link) and pasted in the work that both I'd done, and LinkDelete had done.

I then cleaned it up so that it had 3 columns.

In the action taken and outcome I more or less just covered whether we'd contacted them or if it was impossible to find contact details I noted it as well.

I then marked the Outcome as either “Removed” or “Pending”.

Once it was completed, we wrote a nice reconsideration request inline with the suggestions from LinkDelete and waited.

When we had a result, we then submitted the disavow file in Google webmaster tools.

So what were the end results?

Pretty good really and they seem to be only getting better.

Success! With the help of LinkDelete we were able to get the manual penalty removed.

We received this message about 4 weeks after we submitted the reconsideration request (so around the end of May).

The manual penalty was only applied to the links and not the site. However, after removing all the poor quality links (and perhaps there is some impact of getting the manual penalty removed), it appears that the site is no longer (or at least significantly less) impacted by algorithmic penalties.

The search traffic has surged back.

You'll notice above that the links were removed around the middle of April and the traffic has come back around 8 weeks later.

So it looks like you'll need to allow about 8 weeks from when you start improving your link profile till you see the results you're looking for.

As you can imagine, I highly recommend the LinkDelete service.

If you have any questions or comments, hit me below.

Jun 25, 2014Jay Stockwell
How I doubled my search traffic with only on-page changesThe best day to send emails that get read
Comments: 3

Jay Stockwell is an Online Marketing Expert with over a decade of experience helping both start-up and multi-national companies get "stacks on deck".